The Fantasy Footballers: The Thielen and Diggs Conundrum

Thielen and Diggs make are arguably the best WR tandem in the NFL.  With Adam Thielen ADP in the mid 3rd round and Diggs following closely behind at 4.02 – who should you be targeting in your fantasy drafts?  I look back at their production in 2018 and evaluate the offensive changes in the Vikings’ offense to determine who will be the better fantasy asset on your team

The Fantasy Footballers: Nick Foles & How the Jags Offense Will Function in 2019

I take a look at how the addition of Nick Foles at QB and John DeFilippo at OC on the Jacksonville Jaguars will affect the remaining wide receivers and who to target in your draft and when. Not going to lie, this research surprised me.

The Fantasy Footballers: Why Donte Moncrief Can Help Win Your League

With Antonio Brown gone, there are questions surrounding the coveted WR2 position.  In this article, I detail why Moncrief may be the clear WR2 in the offense and the implications that means for his fantasy value and production.

The Fantasy Footballers: 3 WRs to Remember in 2019

In the latest installment of the Players to Remember series, I dive into three names at the wide receiver position you should keep an eye on later in your drafts.  These are players you can get for cheap and have the opportunity to have some boom games.

The Fantasy Footballers: 3 TEs to Remember in 2019

Let’s face it, the tight end position is practically a skeleton crew of fantasy producers.  Besides the heavy hitters Travis Kelce, Zach Ertz, and George Kittle, here are three names you can target mid to late rounds in your rounds without having to spend a 1st or 2nd draft pick to grab.

The Fantasy Footballers: 3 RBs to Remember in 2019

2019 brings a plethora of change to the NFL with free agency signing, head coaching changes, and the NFL draft.  Here are three running backs who are facing new year in 2019 and have the potential to be fantasy producers you can grab dirt cheap.

I know, I know – Drake either broke your heart or completely messed with your head last year.  Probably both.  When you sat him, he scored 20 touchdowns, when you started him, maybe got you 5 fantasy points.  See why I think Drake has the chance for his first break out year in fantasy.

It’s never too early for some fantasy football rankings!  In this article, I cover hosts Andy, Mike, and Jason’s consensus rankings of QBs in 2019.

The Fantasy Footballers: 3 Potential Busts in 2019

It’s sad!  I hate talking about failure, but I’m afraid for the future of these 3 players.  This the only time you are going hear me say that I hope I am wrong.

I hope I am wrong.  (Sorry everyone).

I am completely unafraid to say that David Johnson is going to come roaring back to fantasy dominance this year.

With the draft still to come – see why I think DJ will be your league winner.

Stay engaged and competitive through the end of the season in Bettle's Arena, even if you missed the playoffs this year.

Finish in the top half in points, but have some bad luck? Bettle can help you get something back this year.

For playoff teams, you worked hard to make your team into a contender. Bettle helps you get even more for that investment.

Get the UDK NOW! 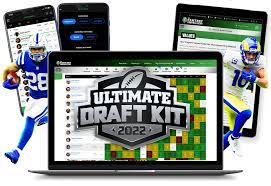 A few links to my most used resources